skip to main | skip to sidebar

I'm not very good/consistent at this blogging stuff. However, due to my affiliation with www.theundeniables.org , I have relocated my thoughts to wordpress.com

It seems as if more people are consistent with checking the wordpress, but maybe when I'm ready I will return to here hehehe.

(in high school i was all about xanga. Funny how technology works on us.)

Talia: :)
me: hello!
i have finals and i haven't studied. hahaha
Talia: no!
ah! i present to the director of the department of health monday, i haven't slept
lol - i want to be the shining student she asks my professor about after hehehe
i'm presenting the molecular risks of co-infection with the swine flu and australia's drug resistant staph. it's fucking scary! and i had my HIV presentation yesterday :) yay!
me: i dont know what u said but wow ok!
r u top student in your class? smarty poo! you are a hard worker and u will go on to discover the cure to HIV and aids -then the government will exterminate you
Talia: fucking hard worker, maybe near the top :) but all my fellow students are DOCTORS!
hahaha exactly
me: unless you move to a 3rd world country
and practice there!
Talia: that's why i'll make it candy, give it to all the kids in africa, and never tell anyone
:)
me: HAHAHA
i'm going to post that!
Talia: i will only tell you, and you'll sit back and laugh when you're 70, when the world rates of HIV disappeared :)
me: then u can teach me
and i'l turn it into a rap
to teach ppl about it!
Talia: awesome!!!!!
OOOOooo i LOVE it!!!
that sounds amazing


I surround myself with beautiful people - we make a great team!!!
Posted by jumakae at 1:45 AM No comments:

I was rushing to make it to school for my first final of the week. Gotta get that piece of paper. On my way down Palos Verde to look for close parking, I noticed a homeless woman waiting at the bus stop. One hand was on her face, shielding it from the sun. As I hit the red light, I took another minute to just observe. Her other hand went to the opposite side of her face, her shoulders tightened up, and her lips stretched into a frown. She buried her face into both hands and started to cry. Cars dashed by to remind me that the light had turned green. Gotta get that piece of paper.

For what?
Posted by jumakae at 5:55 PM No comments:

well, it's the War VERSUS Women...

If our founding fathers see us as children then why would they send us to die?
Where were the mothers who knew the pains of labor, but through sweat and blood found the nature to love? Did we voice her decisions or was she stuck in the kitchen silenced and told to shut up?

Allowing men who plan wars to plan peace must be boys who have rebelled against their mothers, or mothers who have neglected to love. And although the strong women should be the central to peacemaking, we still allow grown up boys to negotiate peace but use our babies as pawns instead of their plastic toys.

I was asked to speak about war but I’ll let the men speak for that.
For while the news report speaks of the government’s decision on when the bombs will be dropped, our women, bearing heavy bags, dad missing since a couple months have passed, fear to report the soldiers who guard her doors every night like vultures waiting for the moment when they can no longer stand without water – and as a “good example” for daughters she sacrifices a piece of her being – the women act as a team, this night is yours and the next will be my body.

With fathers unknown, babies are left on the street to die, masking the truth that was forced between her thighs. Girls learn to stay quiet when women plead for help, but desensitized the only sentence she is given is - adultery. Movie theatres don’t exist, so people gather for the matinee performance of Punishment. It’s like the carnival but the only game to play is toss-the-rock. 10 points to the face and 20 to the womb- Everybody’s a winner and the only loss -is her life.

Mothers warn their children about the dangers to face and the only escape to freedom is through Education.
While Afghan mothers dream of a better future for their daughters, little school girls soon to be women walk for miles with visions shattered as acid sprays their eyes, blinding the path to freedom beyond their visual sight. It is no surprise that the school of 1,300 has now dropped to 35.

Poppy farmers marry off their daughters as young as seven years old to pay back the debts of his privatized crops, but when she finds the strength to leave- her nose and ears are chopped off. What happened to the land that once belonged to our ancestors? Mother Earth wants to weep -to water the soil her children walk on, and as she speaks in soothing whispers through the wind – she cannot compete with the gun shots that force everyone to cover their ears, deaf to the song she wants to sing -to let us know she is still here.

While the latest music craze is Ciara’s Love, Sex, and Magic, our women in Darfur have never known Love, only Sex, and seek this Magic- Magic from the herbs man to cure her dying baby from diarreah, because the western doctor has gone away. Faith is manifested through the prescription of charcoal, water, and glue poured over holy Quranic scriptures – and shea butter covers her body to shield herself from the bullets soon to come.

Men’s cure to their decaying body and the lesions breaking out of his skin are to simply rape-a-virgin, hoping to take the place of a child’s innocence.
So while the village men suffer from AIDS the soldiers march in to begin their own raid.

Doors kicked down, guns pointed between the tears in her eyes, and though only fifteen she felt she had already died four times. Blanks being fired they laugh and inquired which soldier will have their turn tonight?

So WHILE THE GUNS ARE SHOOTING, THE PENIS STILL PENETRATES.
-Deeper than flesh. Our weapons of mass destruction are not man - made, but simply the weapon of man. One man at a time pounding their heavy body on top of hers – deep enough to reach the earth and soiling it with their putrid sweat, with words whispering “We want to make a light baby”. Submit to me because your dark skin a disease and you were meant to be a slave (abd) for all eternity!

From Vietnam to the Philippines American men assisted in war for peace, and my women are taken as workers to satisfy their sexual needs. And though they leave thinking they have succeeded in amity, they have left and never met half white babies. 30 years later they call my ladies whores and prostitutes, Thailand has the highest rate of women still selling their bodies- but people fail to see its roots.

So we say peace by any means but I say my women are making ends meet by any means. And it is beyond for peace, but it is for love, love for the family and the future – our children. With love forgotten- this is how we find ourselves in war. And if a women who knew the pains of labor made the decisions, who do you think she would speak for?

To everyone who wants to perform at the Tiny Toones fundraiser... it's overwhelming the amount of support I am receiving!

And as I open up my heart to you... I find myself saying yes so much only because I fear it would disrupt the number of people who attend. I really want this night to be about Tiny Toones so I apologize for the disorganization that may come across from my side within the next three weeks.

Every decision being made brings me back to question what will be in the best interest of our youth... I am trying my best to ensure the happiness of everyone and some of my decisions may disappoint or hurt others, but I promise that everything I am doing is fully with good intention.

So with that said, this is not MY event. I am only organizing it, and it is an event for the COMMUNITY. Not just for Inglewood and its surrounding cities, but it is an oath to hip hop and its global partners we have the beautiful opportunity to support: 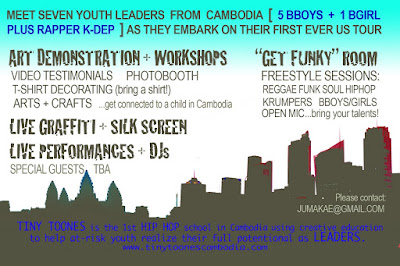 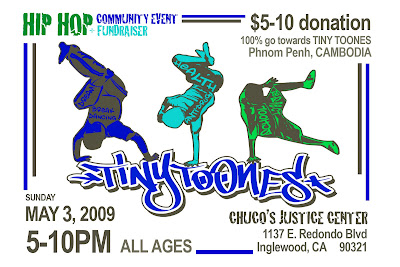 (See Los Angeles event @ www.tinytoonescambodia.com)
Posted by jumakae at 1:25 AM No comments:

This is an email excerpt I received from a community organizer I met at a Be the Cause Meeting:

Yesterday I attended the TED conference at USC, with an autidorium full of brilliant minds. One speaker, Dave Logan, spoke about the five type of tribes that exist in the world. According to his book on Tribal Leadership, all groups and organizations come together one of 5 different levels of consciousness:

* Life Sucks - those who hate life and seek to survive through destruction (gangs, terrorists, etc)
* My Life Sucks - ineffective hierarchichal organizations that stifle spontaneity, creativity, and individual expression (DMV, public utilities, bad companies) but understand that a better life exists elsewhere
* I'm Great - individual high achievers who come together to compete with one another for greater levels of recognition and accolade (professional orgs for doctors, lawyers, etc)
* We Are Great - groups of high achievers who transcend individual ego to work with the emergent properties of the individually great (Google, Zappos)
* Life is Great - tribes that emerge around shared, deeply cherished values (Desmond Tutu's Truth & Reconciliation Council)

Logan says that only 2% of organizations are in the 'Life Is Great' category, and they are the only ones that make fundamental and widespread changes in society.
Can you guess that I was smiling as I was thinking about our tribe? :-)

Life is Great.
Posted by jumakae at 2:17 AM No comments: